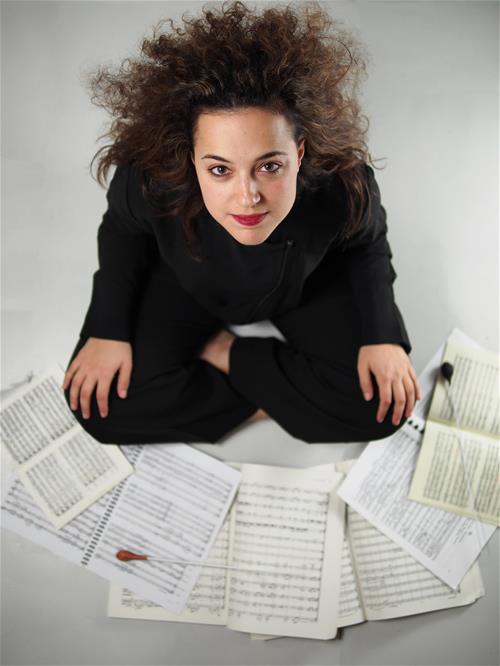 Faidra Giannelou was born in Athens. In 2008, she received her Bachelor-degree in the major of “Orchestral Conducting” from the Music Department of Ionian University under Prof. Miltos Logiadis, being the first Bachelor-degree holder in “Orchestral Conducting”, taken from a Greek university. In September 2010, she received her Master-degree from the same University and in January 2012, she was also admitted as a Ph.D. candidate.

She has been distinguished during her studies with scholarships and awards from the State Scholarship Foundation, the Ionian University and the Greek Ministry of Education. From January 2012, she is a scholar of the A.G. Leventis Foundation.

As an orchestra conductor, she has collaborated with symphony orchestras in Germany, Russia, U.S.A., U.K., Sweden, Estonia, Italy, Spain, Czech Republic, Hungary, Romania, Poland, Croatia, Bulgaria,Turkey and Cyprus. In April 2012, she conducted a World Premiere of A. Georgiadis’ work “Transformation” in Berlin’s Konzerthaus with Camerata Europaea and in October 2013 she was a winner at the International Competition for Young Conductors “Solon Michaelides” organized by Cyprus Symphony Orchestra (2nd  prize – lack of 1st prize). In March 2015, she was invited to assist Kristjan Järvi on his spring tour with Baltic Youth Orchestra. In October 2016, she was appointed Resident Conductor of Chamber Symphony Orchestra (CSO) Contemporary Music Ensemble 3+ and for the year 2007-2008 she was the principal conductor of El Sistema Greece Youth Orchestra and invited Conductor in Opera Studio of Patras.

As a piano soloist, accompanist and correpetitor, she has appeared in numerous concerts, competitions and opera productions.